It was a later trip to see the lights at Mousehole this year as the weather had been too poor for the trip before Christmas. 8 brave souls from Penzance canoe club met at 6pm on a dark still night. Everyone had been issued glow sticks so they could seen in the dark. The reflective strips on everyone's buoyancy aids and cags shone very bright too.

We headed from Penzance harbour to the gear pole and regrouped. A number system had been implemented so we knew if everyone were still together. From here we then headed straight for Loe Lee bouy and congregated there too. All the time we were heading for Mousehole we had a to keep a beady eye open for any boats that could of been crossing our path heading to and from Newlyn harbour.After leaving Loe Lee bouy we headed to the Christmas lights of Mousehole. Our target now was "Merry Christmas 2012" high on the hill side. 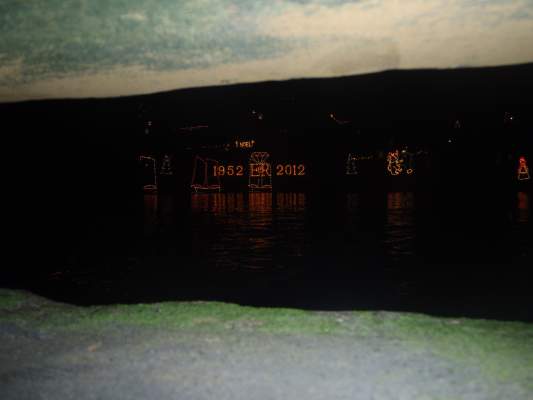 During some of the winter months and when the lights are up, Mousehole blocks their harbour entrance so our view close up of the lights were small glimpses through the wooden slats at the harbour mouth. On our return leg we now followed the coastline back around Penlee point and down towards Newlyn. We congregated at the back of the harbour wall to look for phosphorescents that should of been dripping off of our paddles. Normally there are many around this area but this night there were only a couple so not everyone was lucky enough to see these. We entered Newlyn harbour to see their Christmas lights but as it was late in the festive season Newlyn had already turned their lights off.

Our paddle back across the bay was nice and gentle and invoked many people swapping stories of their Christmases. Once we had returned to Penzance harbour we were met by June who was in the Penwith partnership water sports centre. June had a mouthwatering selection of cakes and mince pies for us and it was even topped off with a nice glass of mullied wine! 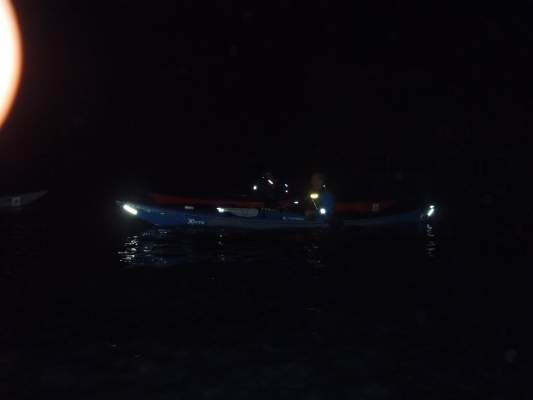